Do you remember back in January, when I posted that I wanted to redo our bathroom?  Well, since Saturday, Jim and I have been working on our bathroom, and what a difference! We’re not finished yet, but I thought I’d give you a little preview.

This is just a reminder of what we started out with. Dark and cramped. I had suggested painting the one wall brown to make the dated oak look better. Unfortunately, it backfired. The oak looked richer, but the room became dark and dirty feeling.
So, here’s what we’ve been up to… 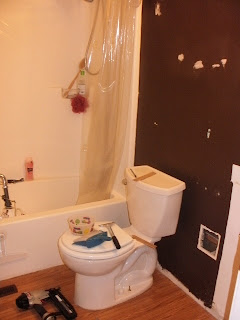 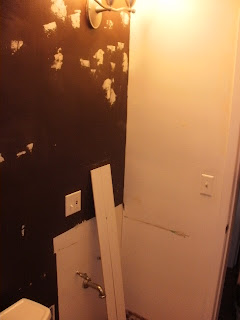 We removed all the cabinets.  See the little hole in the wall next to the toilet? Well that’s where the original toilet paper holder was. It was really low on the wall behind the toilet, and nearly impossible to reach when… I know — TMI!!  Fortunately, Jim had installed one on the cabinet, so we never had to use that one. Still, it remained there even after the new one was installed, because the wall would have needed to be patched. 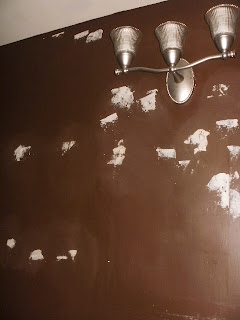 Since we really didn’t prep the wall before we painted it brown, there was a lot of ugly that needed to be spackled. I took on that little job myself, and didn’t do too badly. Every time I look at this picture, I think of a brown cow with white spots! No idea why!!!!! 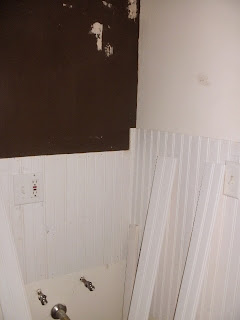 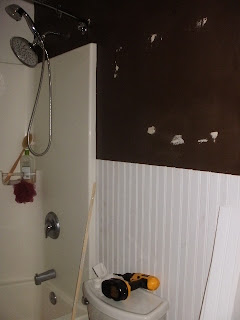 Here you can see Jim had started installing the wainscoting. One thing I’d do differently, if we were to do this again, is I would prime and paint the walls before installing the wainscot. It would have saved a lot of cutting in with the paint. Lesson learned. Hopefully, someone else will save themselves some time by reading this and learn from our mistake.
By the way, Jim said he liked installing beadboard.  We got 8 foot lengths and cut them in half, because I like the higher height. It always looks a little disproportional to me when only the lower third has wainscot–just a personal preference.

We did find out that actual beadboard has a direction. Jim installed it the same way on both sides of the room, and you can see the difference. On the right side of the room, it looks like a solid piece, but on the left side, you can see the gaps where the tongue and groove come together. Another lesson learned. 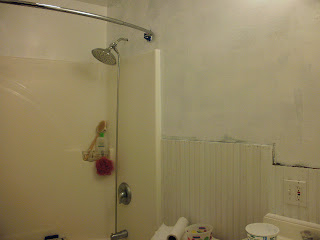 Here it is all primed. You can see little touches of the brown above the beadboard. It already looks so much cleaner. Of course, having the vanity cabinet out made the bathroom feel huge!!  We concentrated on getting plumbing side of the room done first, because we found it was a bit of a hassle being without a bathroom sink. Small house equals one bathroom…and you don’t want your only bathroom out of order for very long! 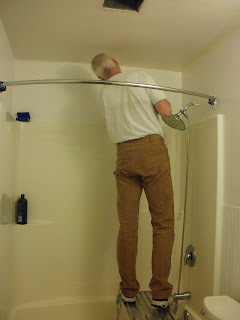 I did most of the painting, but because Jim is 14 inches taller than I am, I decided he should paint the ceiling. Fortunately, he was okay with that. 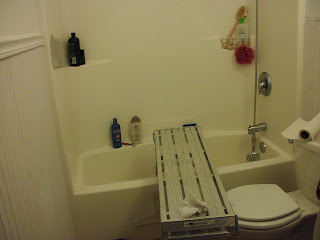 In case you were wondering what Jim was standing on. He got this great little bench thingy a few months ago, and it worked great. It folds up and is light weight. It was also high enough that it fit right over the toilet bowl, which made it very convenient for painting. Otherwise, I would have been standing on the toilet, which probably isn’t a good idea!!! 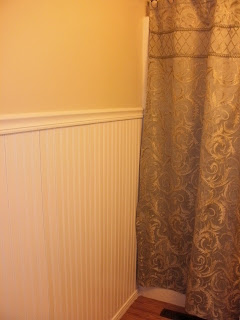 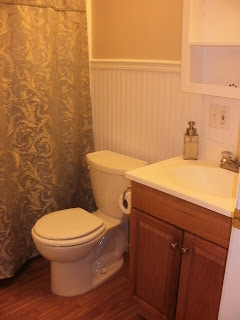 So here is the almost finished after. We decided not to go with green paint. I took the shower curtain to Lowe’s to pick out a color, and selected three colors I liked with it. Then I let Jim pick between the three. This process seems to work really well for us. I don’t remember the other two colors, one was kind of a green/gray color and the other was a blue/green color, and then there was the one we chose, which is Valspar 6008-1B Shoreline Haze. It picks up the gold/beige color of the damask foreground of the shower curtain rather than the background.
I really like the color. It’s very peaceful. Plus I’m not locked into a green color if I ever want to get a new shower curtain. The Shoreline Haze is so versatile. I took the chip with me to buy some new accessories, and the color goes with practically anything.  I know, I know…it’s a “safe” color, but EVERY room doesn’t have to make a design color statement!! 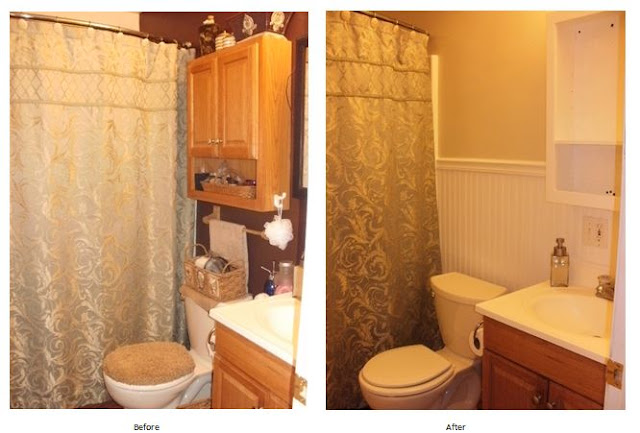 So here’s a side by side of the bathroom before and after.  We still have some more to do. Actually, we’ve already done more, but I still have to upload the pictures to my computer. Plus, I have to leave some things for the final reveal.  I just wanted to give you a little preview.
What do you think?  Good so far?

The wait is over! We bought a house!
Before and After: Dining Chairs
We have running water again