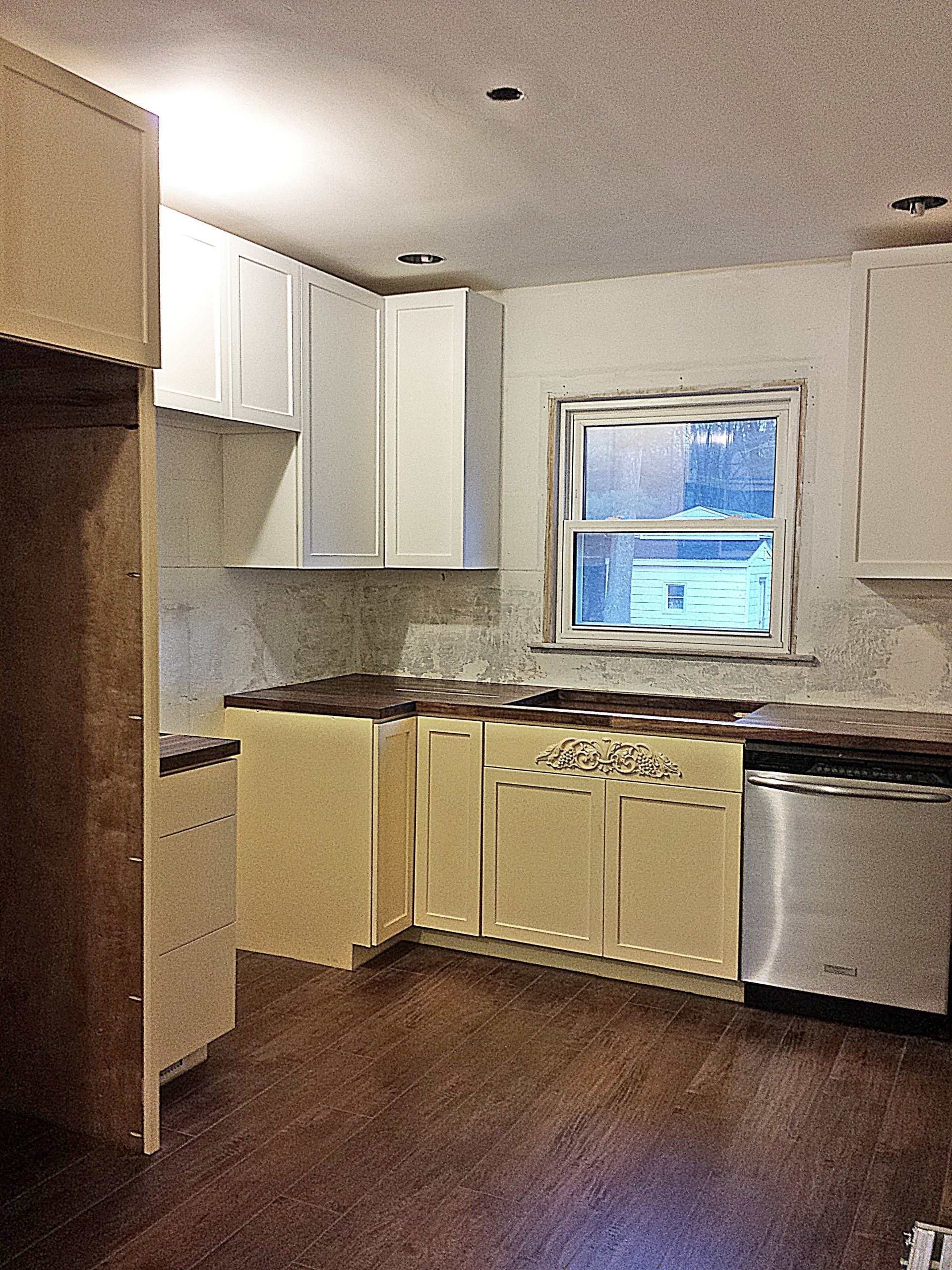 We’ve accomplished a lot. It’s just taken longer than expected. But isn’t that the way of every renovation project? Don’t they always take longer than expected? What do you think of the changes so far? I’m absolutely loving the yellow color I selected for the cabinets.
Our cabinets were ordered in September and were done mid-October. The first set back was when we found out one of our new cabinets would not fit in the door. We tried every way we could think of to try and get that cabinet in the door.

We finally gave up and took it back to have it modified to fit. But it turned out okay, because Jim got the unique opportunity to work with our Amish cabinet maker in his shop. It was interesting to see how Rudy ran all the equipment without electricity. Jim really enjoyed it, and it was something he wouldn’t have gotten to do if the cabinet had fit.

Jim was disappointed I didn’t take pictures while he was working in the Amish workshop, but I read somewhere that the Amish don’t like to have their pictures taken, so I didn’t want to be disrespectful.

Of course, before the new cabinets could be installed, the old cabinets had to come out. So I listed our old cabinets on Craigslist for $150 with the provision that whoever bought them had to remove them. With in 10 minutes I had four people who wanted them! We spoke to two of them on the phone and told them both what time we’d be at the house the next day.

One of the guys showed up right at the time we told him, and the other called to say he’d be there in an hour. Since my ad said said the first person with cash and crew could have them we let the guy who was there take them. Needless to say, the other guy wasn’t happy. Anyway, the guy who showed up with cash in hand and two helpers worked for at least four hours removing them. I was very impressed, because they were very careful not to ruin our walls, and by the end of the day, our kitchen was gutted.

We were left with a serious mess after the cabinets were removed. But I have to admit, we were glad we did have to remove them ourselves, so clean up was okay with us.  After we cleaned up, it was onto taking out the linoleum.

We quickly found out we had to be careful ripping up the linoleum, because there was asbestos tile under it. It took us a while to decide how we wanted to deal with the asbestos. Ultimately, we decided to lay the laminate floor right over top of it. I think I mentioned before that I’m kind of glad the tile stayed, because it feels like we preserved some of the house’s history.

After linoleum was removed, the plumber and electrician came in. The plumber updated the plumbing for the sink, to make it easier to set in the sink cabinet. The electrician removed all the outlets and lights, except one chandelier. I highly recommend having your electrician do that if you ever gut your kitchen. With the electrical gone, we can put outlets and switches exactly where we want, and we don’t have to deal with working around electrical that is in the wrong place. Makes things much easier.
Once everything was out of the kitchen, a friend of ours came over to help install the cabinets. It was after the cabinets were installed that I realized the ceiling fan I bought for the kitchen is too big. If I hadn’t designed the cabinets to be floor to ceiling, it wouldn’t have been an issue. But let’s just say if we install the original one I got, if someone opened the cabinet above the refrigerator when the ceiling fan was running, either the ceiling fan or the cabinet door would die a terrible, painful death. Not good.
Finally, after all that, the kitchen was the last room in the house that we installed laminate flooring in. We learned a lot of lessons by doing almost an entire house, and I’ll doing a post very soon about those lessons. Let’s just say, there are a lot of things they don’t tell you that you need to know.
Now that the cabinets and floors have been installed. I’ve been working on painting the cabinets. Actually, painted the bases before the flooring was installed, and now I’m working on painting the doors.
So what needs to still be done? Well, the countertop is hopefully going in this week, so we can do the tile backsplash. Then the electrical and plumbing need to be done. After that, there are only minor things that will need to be done. I’m hoping to have the upper cabinet doors painted this week too. The list is getting shorter and shorter, which is making me very happy.
Hey! I’d love to hear about your renovations! Leave a comment below and let me know what you think?

Choosing Kitchen Colors
I started refinishing the table
Before & After: Dining room chairs and our "haunted" table