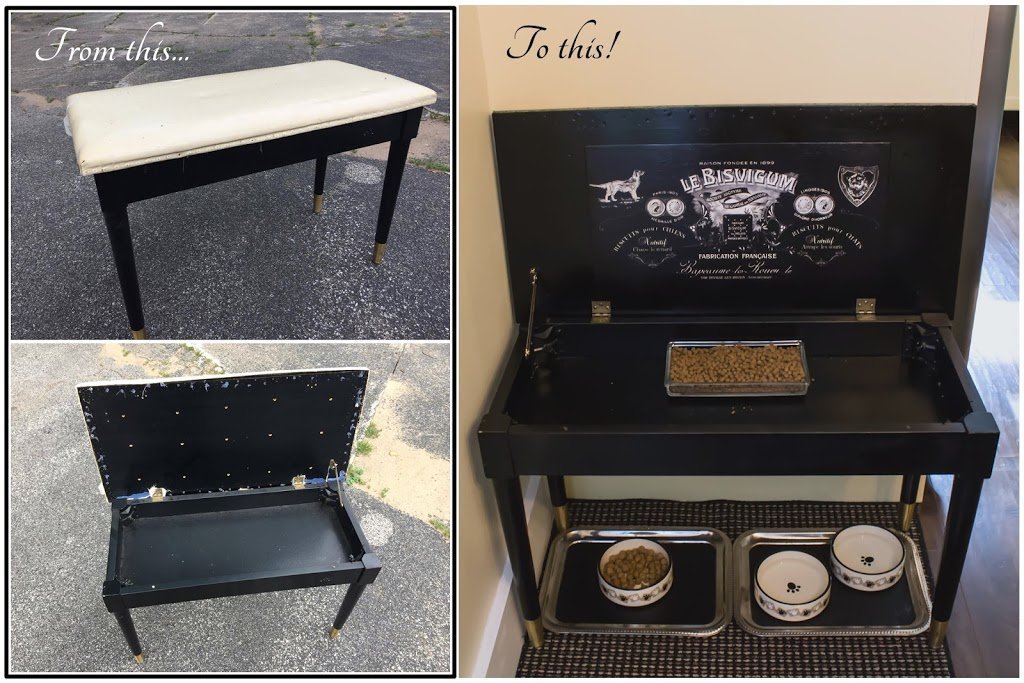 Having two new kittens has meant rethinking some things we’ve never really thought about, like where to feed two cats instead of just one, and how to do it in a way that keeps Tia out of their food. An old piano bench proved to be the purrfect solution!

The reason we had to rethink the food thing is that cat food makes Tia sick, so it’s important that we keep it up where she can’t get it.  It was never a problem with Jasper’s. We just always put his food up on a chair. Not the prettiest solution, I think he liked it because he had room to sit and eat without being bothered by Tia. The chair was kind of his special spot, and it worked pretty well. Except he was kind of a messy eater, and the chair didn’t stop food from falling on the floor. Fortunately, even though Tia always found it, she never found enough to make her sick. 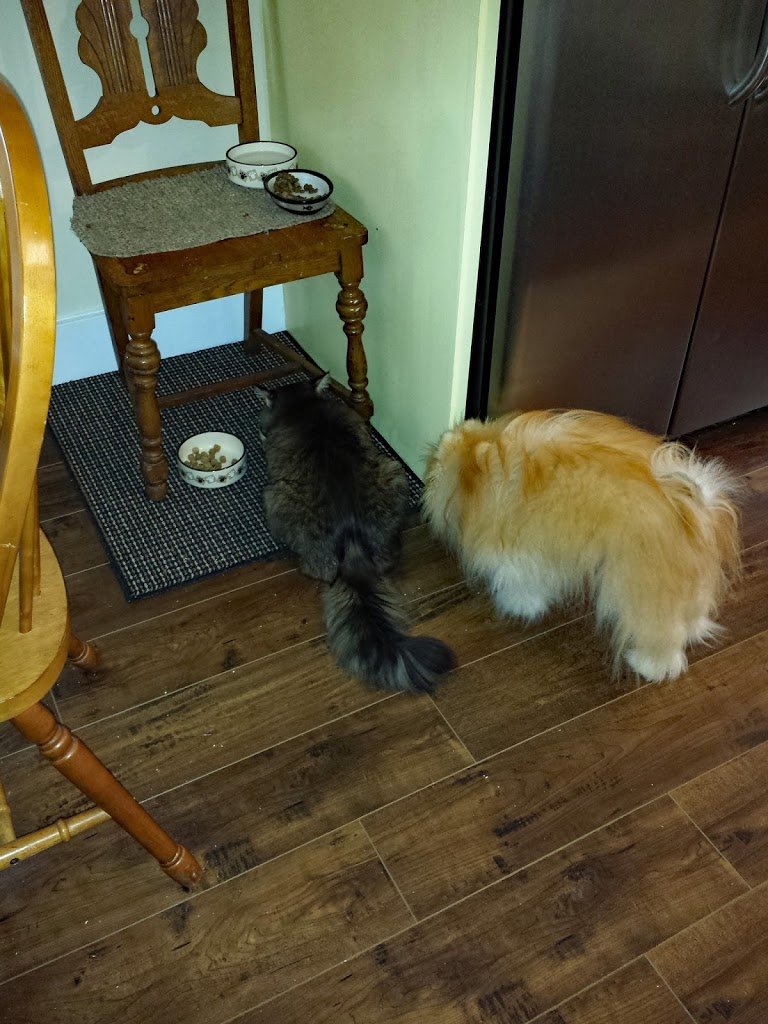 Jasper’s chair wasn’t a pretty solution, but it worked okay. (I miss him so much.)
Here he is drinking Tia’s water, while she waited patiently.

Anyway, now that we have the new kittens, keeping Tia out of the cat food is still an issue. We continued to use the chair to keep their food up, but it was obvious it wasn’t going to work long term. The kittens like to eat together, and eventually, the chair wouldn’t be big enough to fit the two of them once they’re full-grown.

Jim and I talked about building a bench quite a while ago, but we never knew exactly what we wanted. The idea for it kept changing. So I started looking for something that might work until we figured out what we really wanted. Nothing I found was right. Then I started really looking at the piano bench in our front hall. It was the right size. Something like that might work.

As fate would have it, I found a piano bench listed on a Facebook garage sale page (I think these garage sale pages might give Craigslist a run for their money), but it was already sold. Luckily, the guy selling it had another one that his wife hadn’t painted it yet, and he sold me that one. SCORE!

The piano bench was not pretty, but I could see it had potential.
It was going to make a perfect pet feeding station for the kids.

It definitely had some issues. The vinyl was ugly, it had a ton of staples and nails, and it probably had a tufted seat cushion at some time based on all the holes drilled in the lid. Still, other than the lid, the rest was in perfect condition. The base was solid and in excellent shape.

After I took the lid off, I put the base in the kitchen and let the kittens start using it right away. I hadn’t considered putting the food in the base, but it turned out to be a good idea because it keeps the food from getting on the floor–something Jasper’s chair never did.

The top required a lot of work. I had to rip off the vinyl, which was covering some sticky black gunk. That stuff was awful! After I got the gunk off, I had to remove all the staples and nails. Then, all the holes had to be filled, and finally, it had to be painted with black lacquer. 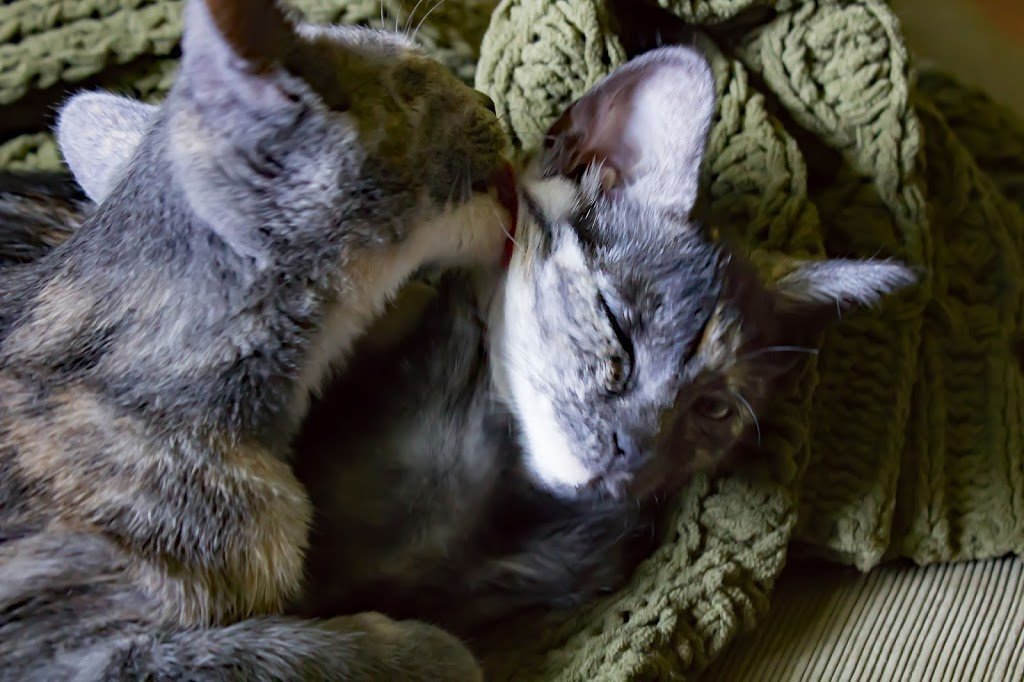 Sophie and Bella do everything together.
It’s so sweet to see the way they take care of each other.

I actually thought about not using the lid since the base was working without it, but it just kind of looked like a bench that was missing the top. So I decided to repair the lid. But I didn’t want it to be just an open lid. I wanted to do something special with it, and I knew exactly what I wanted to do.

I wanted to try decoupaging again because I enjoyed doing it with my porch sign. I thought the lid would be perfect to put something vintage and French on it, preferably with something that had something do with dogs and cats since it’s going to be a feeding station for Tia and the kittens. 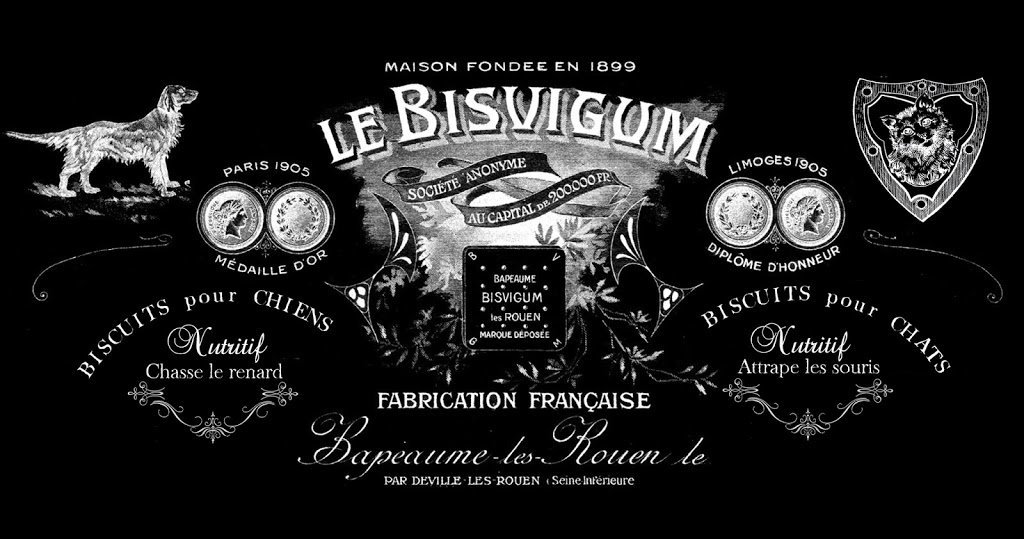 How the French Advertisement looked after I reworked it to include cats.
It started out with a chicken but ended up with a cat.

Well, I couldn’t find anything with dogs and cats, but I did find a vintage French advert with a dog and a chicken on it. With a little computer magic, I switched things around on it and ended up with exactly what I wanted! I think it turned out perfect since this was going to be a feeding station for Tia and the kittens. 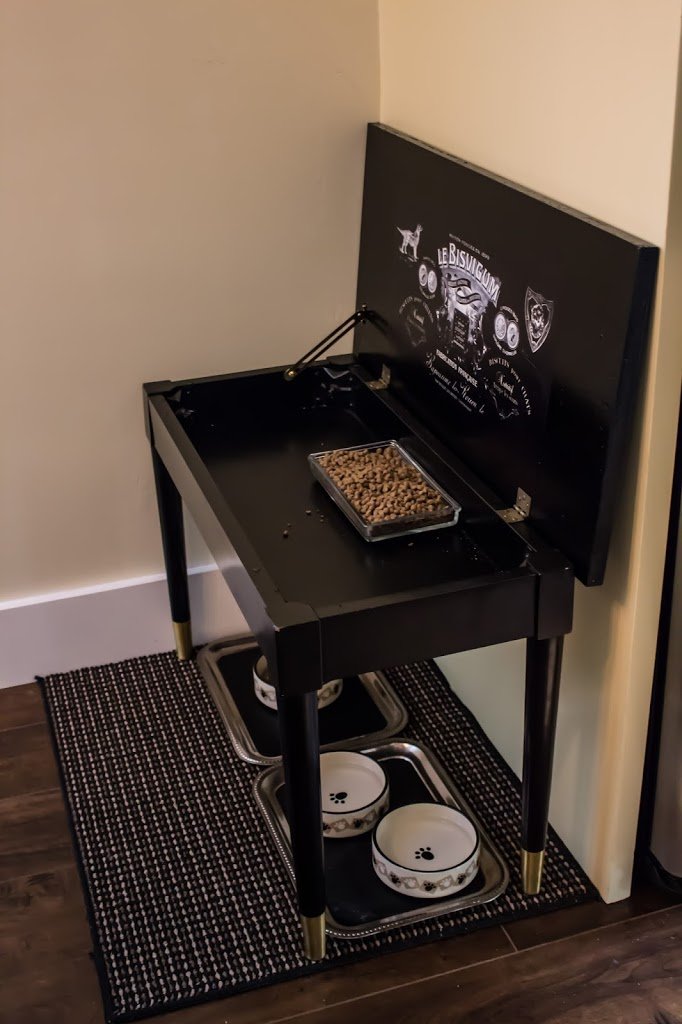 The finished bench is all set up and ready for hungry kittens.
There’s room for Bella and Sophie, and Tia has her space too.

Because I had some experience, this time I had an easier time decoupaging the lid than I did my porch sign. I finished it off with some high gloss clear lacquer just to make sure it would be durable. Then I had to make sure the lid wouldn’t fall on the kittens after I reattached it to the base. I’ve bumped, pulled on it, pushed it, wiggled the hinge stay, and I’m confident they’re safe using it. Because, of course, their safety comes first. If I thought they were in any danger, I’d take the lid back off immediately. 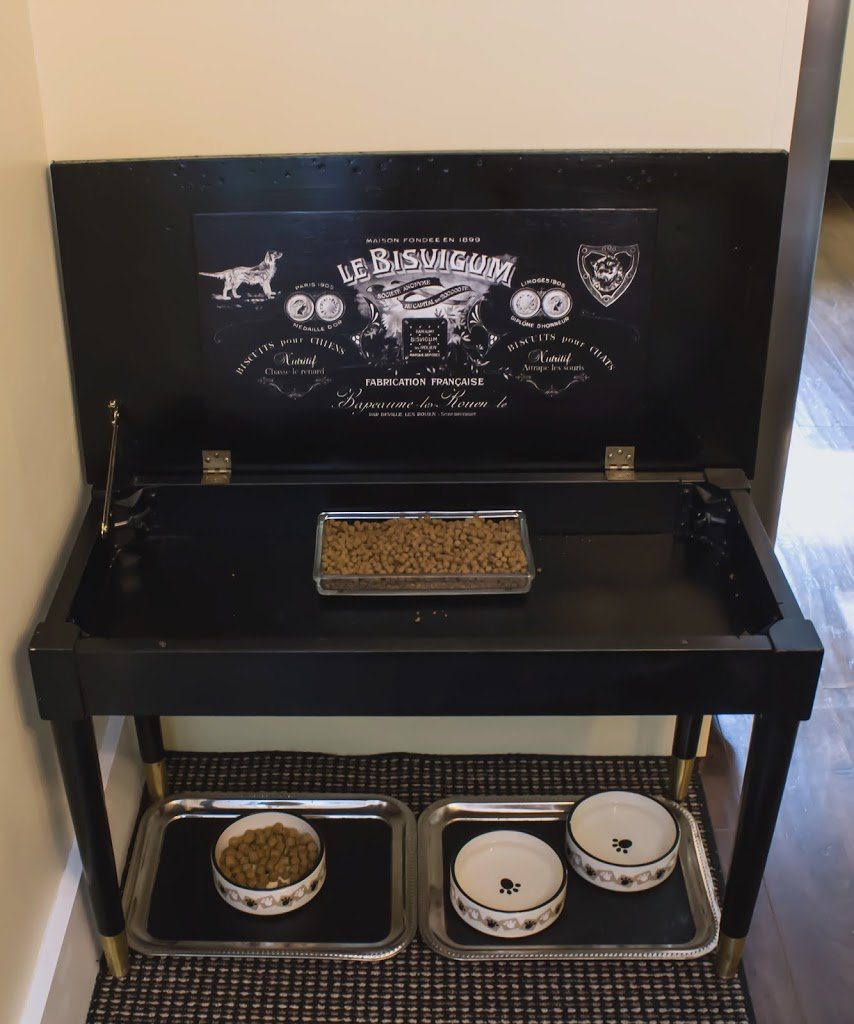 It fits the space perfectly! Sophie and Bella’s food is in the bench,
and Tia’s food is underneath with two bowls of water.

I’m really happy with how turned out. It actually looks so much better than Jasper’s chair ever looked. And I’ve already found an added benefit to putting the lid back on. When they need to fast for any tests, I can simply close the lid. Easy-peasy.

What do you think?

Feeling at home and enjoying the deck
My new French Chic office in Parisian Pink!
Small change in the kitchen -- Huge impact

PrevPreviousI wanted a porch sign, so….
NextWhat I love and hate about my house after a yearNext
Subscribe
0 Comments
Inline Feedbacks
View all comments

Thank you! I'm really happy with how it turned out. I showed a picture of it to our veterinarian and he thought it was "pretty slick."

I love this idea and it turned out so beautiful.