While Jim was Away 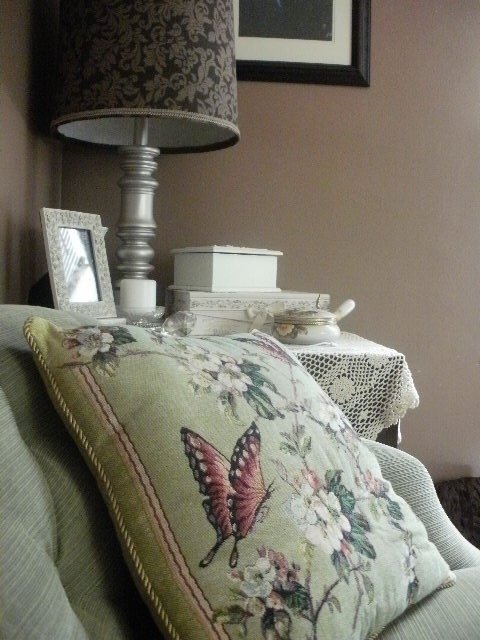 Last week, Jim was out of town on business, so I had the whole house to myself.  Do you know what I decided to do while he was away?

I repainted the living room!

Yep!  I did the whole thing all by myself.

I didn’t even let on to Jim that I was thinking about doing it when he was gone. I didn’t mention it for a couple reasons… One, I wanted to surprise him and have it all done when he got home.  And, two, I was afraid he’d tell me to wait until he got home, which would mean waiting months, because he’s extremely busy right now between his new job and school.

I think I’ve told you that since we got our new green sofa last April, that I’ve been unhappy with the wall color in our living room. The old color looked great with the black leather and mahogany furniture, but not so great with the green sofa. It just had too much of a pink undertone, which wasn’t as evident before the new sofa was put in the room.

You can see from the photo above, the living room has come a long way.  The furniture placement is still the same, but that’s because there really isn’t another way to arrange the furniture in such a small room…that is without moving the tv.

Look at how dark everything is… Dark sofa, dark side chair, dark recliner, dark art, dark paint…even the lamp shades were black! Everything was just dark. I think that’s what happens when you move from an apartment that you can’t paint. You choose dark colors to make up for not being allowed to do so before.  The dark furniture was a matter of combining households. Jim’s black leather sofa was already there, so my sofa was given to my parents.

In defense of all the dark, it was very cozy and Jim loved the dark walls when watching tv.

Here’s the living room after we got the new sofa and a new chair and ottoman. The room looked a light lighter and was so much nicer. New, lighter artwork, new lampshades.  It was step in the right direction, but the paint color just did not work.  Jim said I couldn’t change it though, because we had just painted the living room only three years earlier.  He didn’t understand how hard it was for an artist to live with colors that aren’t right!!

I’ll admit that I was not entirely thrilled with the color at first when I was finished. And I even did a test sample.  But this color looks so different in different lights.  However, I did not dislike it as much as I did the original brown with the pink undertone, so I decided to live with it for a while. Now that it’s been on the walls for more than a week, I’m happy with it.

One of the things that I didn’t like about the old color is it didn’t look good with the kitchen color. That’s why paying attention to the undertones in color is soooo important. When I chose the color for the living room, there weren’t any other colors in the house.  The furniture was black, the table was oak, the cabinets were oak with white countertops.  The woodwork was either white or an orange color that was going to be changed to white.

The kitchen color was chosen after the living room was painted, but I didn’t worry about the living room color when I chose it, because I knew I wanted to change that anyway. Especially when I saw how pink the original color was compared to the new colors I was looking at.

Now don’t get me wrong. I still love the color pink, it just doesn’t work very well very often as an undertone in other colors.

Here you can see the color with the sofa a little better.  It’s still not the very best color to go with it, but it isn’t horrible.

Getting a good picture of the armoire is proving to be very difficult.  The sun always puts a glare on the picture. I’ll try doing it again later.  I have something to show you later having to do with the armoire anyway.

I’m not exactly sure whether Jim likes the color or not.  I think he was glad the color was still dark, although, it doesn’t feel as dark during the day.  By the way, I’m ignoring the carpet for now, because that is going away eventually to be replace with the hardwood that is under it.

So let’s take one last look… 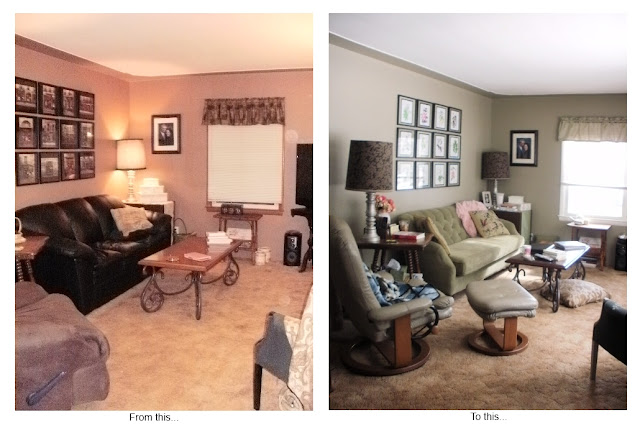 Oh! One more thing…  Jim has agreed to let me get rid of the mini blinds and vertical blinds.  I’ll be getting roman shades and curtains for this room very soon!!

Our New Old Bathroom Cabinet
Small change in the kitchen -- Huge impact
Before & After: Dining room chairs and our "haunted" table